Many tenants think that the rent they pay each year is calculated based on the area of the actual, physical space that they lease.  After all, that seems like the most logical approach.  Take the rent per square foot, multiply it by the area leased, and that should be the total rent paid for the year.  Right?  Not quite.

In fact, most office tenants pay rent for an area that is significantly larger than the actual space that they lease.  This larger area on which rent is paid (called the “Rentable Area” of the premises) includes, not just the actual space that is leased (the “Useable Area”) but also a share of the common areas of the building.

In most office buildings, however, rents for these spaces would be based on the Rentable (not the Usable) Area of each space, which means that each tenant would pay rent, not just on its own space (2000 square feet), but, instead, on the sum of its Usable Area (2000 square feet) plus its share of the common areas (1/2 of the 200 sf lobby or 100 sf).  As a result, each tenant in Building A would pay rent on 2100 Rentable Square Feet, for a total rent of $42,000 per year, instead of the $40,000 that would be due if each tenant paid rent only on its Usable Area. 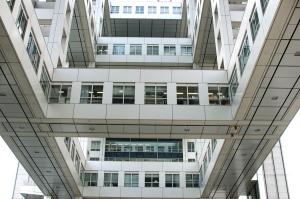 If the size of the common areas is different in every building, and some landlords do not use Rentable Area, at all, how can you possibly compare the rents charged for different spaces and find the best deal?  The answer is to do your own calculation of the cost, per Usable Square Foot, for each space you are considering.  This is the true cost for each square foot of space that you will actually occupy.

To calculate this cost, you should begin by asking each prospective landlord these two questions:

As you can see, in the case of Buildings A and B, although both landlords are charging $20 per Rentable Square Foot, the space in Building B would actually cost significantly more, per Usable Square Foot, than the space in Building A.  Consequently, tenants need to understand exactly how their office space is measured before they can determine the trust cost of that space.

This article was written by Janice L. Gauthier, Esq. Ms. Gauthier has an A.B. from Harvard University and a J.D. from Harvard Law School.  She is the owner of The Gauthier Law Group, LLC, a boutique law firm that represents dentists, physicians, health care providers, professional service practices and other businesses and business owners in Wisconsin and Illinois.  You can contact Ms. Gauthier at 414-270-3857 or by email. To learn more about Ms. Gauthier’s background and experience, visit her Google or LinkedIn profiles.